Third period gets away from Broncos in Game 3 loss 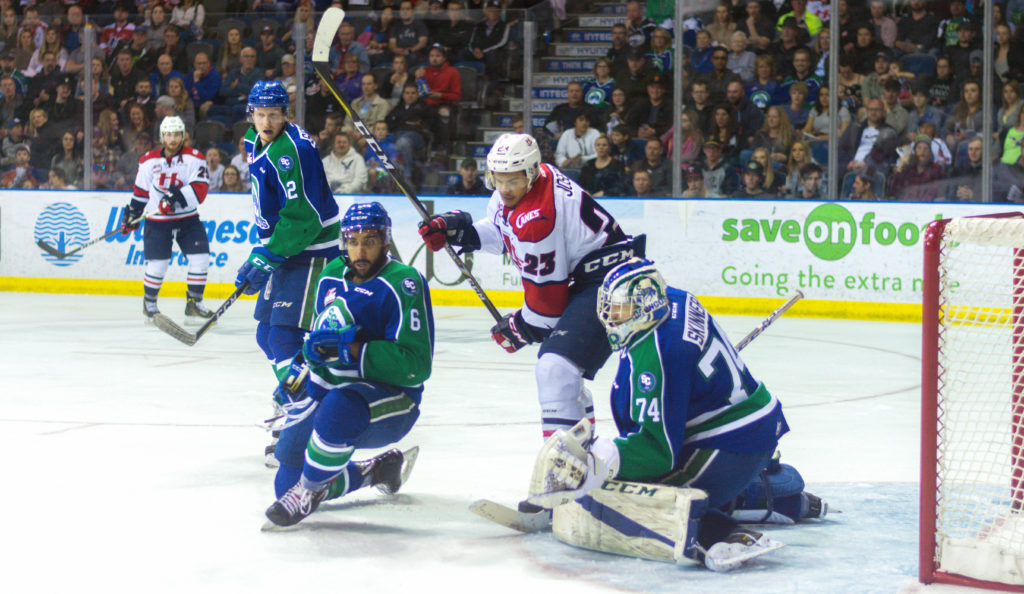 The Swift Current Broncos and Lethbridge Hurricanes met on Tuesday evening for Game 3 of the WHL Eastern Conference Championship Series at the Enmax Centre. Swift Current was seeking a stranglehold 3-0 series lead, having won the first two games on home ice earlier in the week but it was Lethbridge that came out victorious in this one as they beat the Broncos 5-1.

Both teams entered the game with lots of energy along with plenty of back and forth action that had scoring chances, body checks and great saves. It was scoreless however after 20 minutes with the Broncos holding an 11-8 advantage in shots on goal.

Hurricanes forward Dylan Cozens gave the home team a 1-0 lead minutes into the second period when his shot from the high slot snuck through Broncos netminder Stuart Skinner. The 19-year-old made the save partially but the puck just crossed the line a second before Swift Current defenders could clear the puck away.

The Broncos tied it up at the 16:53 mark when forward Andrew Fyten banged in his second goal of the playoffs from next door to the Hurricanes crease.

Before the second period concluded, Lethbridge’s Brad Morrison scored to record his WHL-leading 32nd point of the postseason and give the Hurricanes a 2-1 lead through 40 minutes. Morrison’s shot from the left point got by a screened Skinner and came on a man advantage.

The third period got away from the Broncos as Cozens scored his second of the night after getting stationed alone in front of the Hurricanes goal and wristing one by Skinner to make it 3-1 just a minute into the period.

Morrison then added a pair of goals for Lethbridge, including an empty netter to register a hat trick and send Swift Current to a 5-1 loss.

Shots on goal were 34-24 in favour of Lethbridge. The Hurricanes power play went 2/4 while the Broncos finished the night 0/2.

Game Four of the WHL Eastern Conference Championship is scheduled for Wednesday, April 25th from the Enmax Centre at 7:00pm. Swift Current leads the best-of-seven series 2-1.

Tickets for Game 5 will go on sale Thursday, April 26th at 12:00pm. Season ticket holders have until 1:00pm Friday, April 27th to pick up and/or purchase their tickets.