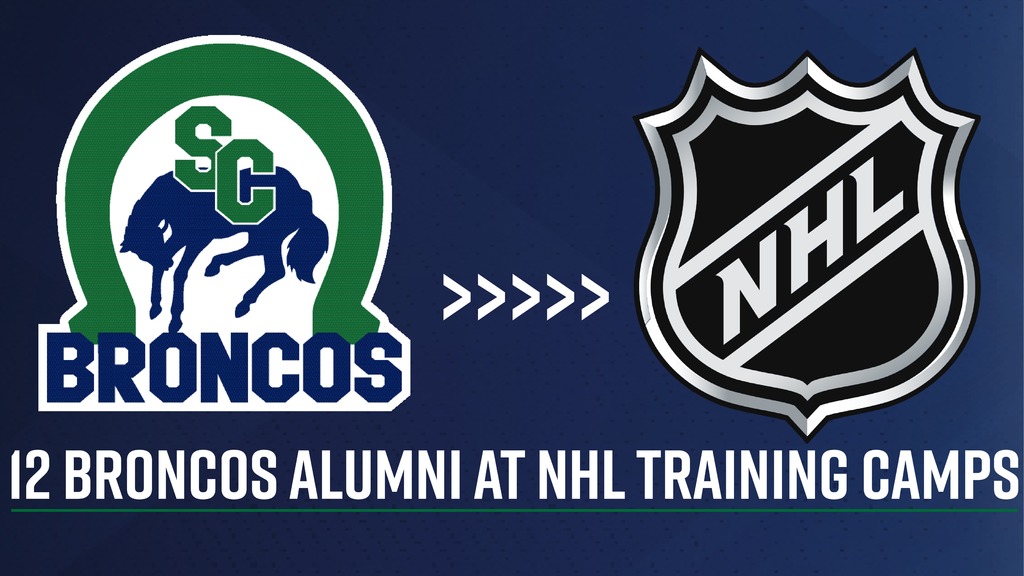 The twelve players are split amongst 10 teams in the NHL, and are as follows:

Lane Pederson enters his fourth professional season as he joins Arizona Coyotes camp. Pederson has spent the past three years with the Coyotes AHL affiliate, the Tucson Roadrunners, recording 51 goals and 56 assists in 167 games. Pederson dressed for 99 regular season games with the Broncos after being acquired from the Red Deer Rebels December 27, 2015. He was exactly a point-per-game player over those 99 games, scoring 39 goals and 60 assists. He was signed by the Coyotes October 13, 2016.

Jake DeBrusk is gearing up for his fourth season in the NHL with the Boston Bruins, fresh of signing a two-year contract extension November 23. To date DeBrusk has played 203 games in the NHL, scoring 62 goals and 58 assists. Drafted 137th overall by the Broncos in 2011, DeBrusk blossomed into an elite WHL player recording 185 points in 205 games. Of those numbers, 146 points and 168 games came in a Broncos jersey before he was traded to the Red Deer Rebels December 27, 2015.

Cody Eakin found himself a new home when he signed a two-year contract with the Buffalo Sabres October 10. Now entering his 10th season in the NHL, Eakin has 586 games and 237 points to his credit with stops in Washington, Dallas, Las Vegas and Winnipeg. Originally the sixth overall pick by the Broncos in the 2006 WHL Draft, Eakin played 212 games for the Broncos before being traded to the Kootenay ICE at the 2011 trade deadline. He went on to help the ICE win the Ed Chynoweth Cup that year.

Glenn Gawdin, one of the all-time greats in franchise history, is skating with the Calgary Flames with his sights on earning a roster spot after receiving a one-year contract extension. Gawdin improved his offensive production in the AHL with the Stockton Heat by 11 points from his rookie season, despite appearing in 11 fewer games in 2019-20. The fifth overall pick in the 2012 WHL Draft, Gawdin played five full seasons for the Broncos finishing with 313 points in 312 games, good for fifth on the franchise’s all-time scoring list. He saved his best for last as he posted 125 points during the 2017-18 season, second only to Jayden Halbgewachs of the Moose Jaw Warriors. Gawdin got the last laugh however, as he continued his torrid pace in the 2018 WHL playoffs with 32 points in 24 games to lead the Broncos to a WHL Championship and playoff MVP honours. After going unsigned by the St. Louis Blues following their selection of him in the 2015 NHL Draft, Gawdin signed with the Flames as a free agent November 17, 2017.

Justin Dowling had a long season with the Dallas Stars as he was with the team during their run to the Stanley Cup Final in the Edmonton bubble, and is on the ice with the Stars for training camp. Dowling has been a member of the Stars organization since early 2013 and has skated in 49 career NHL games to date, recording three goals and six assists. The majority of Dowling’s nine-year professional career has been spent with the Stars AHL affiliate, the Texas Stars, where he won a Calder Cup Championship in 2014. Dowling spent his entire WHL career in Swift Current posting 242 points in 280 games from 2007-2011.

Julius Honka is back with the Dallas Stars after a one-year stop in Finland. Honka played just one season with the Broncos in 2013-14, but it was an impactful one as he scored 56 points in 62 games. He also represented Finland on the international stage that year, helping Team Finland win the gold medal at the 2014 World Junior Championships in Malmö, Sweden. Honka’s season saw the Stars draft him 14th overall during the 2014 NHL Draft, and he spent the next five years in the Stars organization appearing in 87 NHL games. After spending the 2019-20 season in Finland with JYP, Honka is back with the Stars on a one-year contract.

Landon Bow is the third and final Broncos alum at Dallas Stars training camp. He also had a long summer as he was the third goalie with the Stars in the Edmonton bubble during their run to the Stanley Cup Final. Drafted 78th overall by Swift Current in 2010, Bow had a long WHL career that spanned 160 games. The vast majority of that time was spent with the Broncos as Bow had a career record of 58-50-8-5 with a .908 save percentage and a 3.12 GAA with the Broncos. Bow was traded to the Seattle Thunderbirds January 6, 2016. He signed an AHL contract with the Texas Stars following the 2015-16 season and has been a member of the Stars organization ever since. He appeared in two NHL games during the 2018-19 season.

Stuart Skinner joins the Edmonton Oilers for training camp in the third and final year of his entry-level contract. While he wasn’t a Bronco for very long, Skinner made the most of his time with the team as he backstopped them to the 2018 Ed Chynoweth Cup. Acquired at the trade deadline from the Lethbridge Hurricanes, Skinner found his groove during the 2018 playoffs posting a 16-8-2 record with a 2.20 GAA and .932 save percentage. Drafted by his hometown Oilers 78th overall in the 2017 NHL Entry Draft, Skinner has worked his way up the ladder with a full season in the ECHL with Wichita and a full season in the AHL with Bakersfield.

Aleksi Heponiemi is at camp with the Florida Panthers following his first professional season in North America last year. An offensive powerhouse during his two years in Swift Current, Heponiemi racked up 204 points in just 126 games in Swift Current from 2016-2018. He added another 30 points in 24 playoff games to help the Broncos win the 2018 WHL title. Drafted 40th overall by the Panthers in 2017, Heponiemi returned to his native Finland for the 2018-19 season and continued his offensive prowess with 46 points in 50 games for Kärpät. His 46 points led the way for rookies in Finland’s Liiga that year. He also played a huge role in Finland winning the 2019 World Junior Championships with nine points in seven games. Heponiemi joined the Panthers organization last season posting 14 points with the Springfield Thunderbirds.

Max Lajoie enters his fourth year with the Ottawa Senators organization as he joins them for training camp. A member of the Broncos for three seasons, Lajoie recorded 119 points in 202 games in Swift Current before beginning his professional career for the 2017-18 season. Drafted by the Senators with the 133rd overall pick in 2016, Lajoie spent his first season with their AHL affiliate in Belleville, before spending nearly the entire 2018-19 season in Ottawa. He burst onto the scene with a goal and an assist in his first NHL game, an overtime loss to Chicago October 4, 2018.

Joel Hofer has graduated from the WHL and embarks on his professional career with the St. Louis Blues. Signed as an undrafted free agent by the Broncos, Hofer joined the team in the 2017-18 season, helping the Broncos win the Ed Chynoweth Cup. Handed the reigns as the starter the following year, Hofer held the fort for the first half of the season before being moved to the Portland Winterhawks at the trade deadline for a haul of draft picks, including two first-round selections. He gained national attention when he took charge as Team Canada’s starting goalie during the 2020 World Junior Championships, backstopping them to a gold medal.

Adam Lowry is back with the Winnipeg Jets for the seventh consecutive season, and eighth overall with the organization. The 67th overall pick in the 2011 NHL Entry Draft has played 408 games with the Jets to date, scoring 57 goals with 66 assists. Lwory also spent his entire WHL career with the Broncos, skating in 231 games from 2008-2012 while recording 90 goals and 114 assists. He was named the team’s captain in his final season, and finished his WHL career with a bang, shattering previous career highs with 45 goals and 43 assists in 72 games.

The Broncos would like to wish all of their alumni the best of luck as they kick off their 2020-21 seasons.