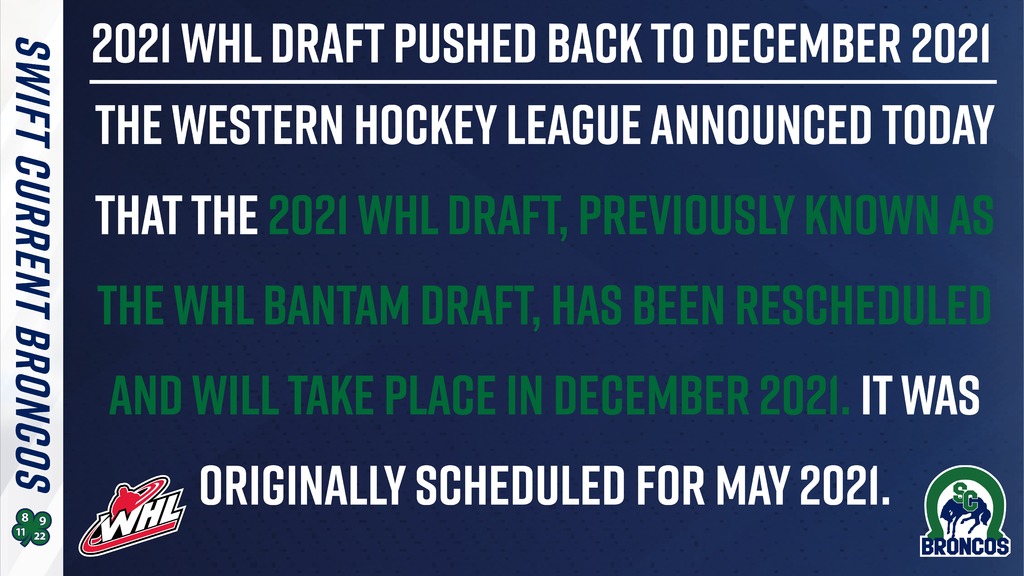 Calgary, Alta. – The Western Hockey League announced today the 2021 WHL Draft, previously referred to as the WHL Bantam Draft, has been rescheduled and will be conducted in December 2021. The WHL Draft was originally scheduled to take place in May 2021.

“Moving the 2021 WHL Draft from May to December allows additional time for players in the 2006 age group to be evaluated following a challenging season due to the COVID-19 pandemic,” commented WHL Commissioner Ron Robison. “We anticipate minor hockey leagues and tournaments will be fully operational in the fall, which will allow players to compete at a high level once again.”

The WHL also announced today that the 2021 WHL Cup is tentatively scheduled to be held in October 2021, featuring WHL Draft-eligible players, providing another opportunity for eligible players to showcase their talents to WHL scouts in advance of the 2021 WHL Draft. The 2021 WHL Cup will feature Under-16 teams from each of Canada’s four Western branches – BC Hockey, Hockey Alberta, the Saskatchewan Hockey Association, and Hockey Manitoba – competing for U-16 supremacy in Western Canada. The 2020 WHL Cup, which was scheduled to be held in October 2020 was cancelled due to the pandemic.

About the Western Hockey League

Regarded as the world’s finest development league for junior hockey players, the Western Hockey League (WHL) head office is based in Calgary, Alberta. The WHL consists of 22 member Clubs with 17 located in Western Canada and five in the U.S. Pacific Northwest. A member of the Canadian Hockey League, the WHL has been a leading supplier of talent for the National Hockey League for over 50 years. The WHL is also the leading provider of hockey scholarships with over 375 graduates each year receiving WHL Scholarships to pursue a post-secondary education of their choice. Each season, WHL players also form the nucleus of Canada’s National Junior Hockey Team.