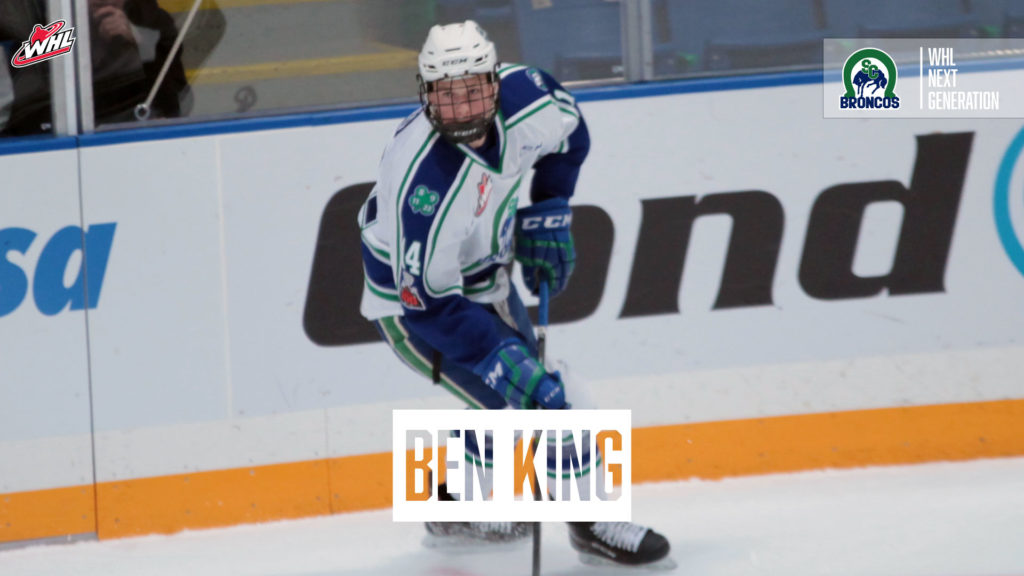 The Swift Current Broncos won the Ed Chynoweth Cup as WHL Champions last season. In a town of under 17,000 people, this is big news. The entire city of Swift Current rallied behind their team in one of the greatest playoffs atmosphere to date. When you play for the Broncos, you’re not just a hockey player like everywhere else, you become an icon in the community and people will know who you are wherever you go. This is something Ben King experienced first hand and is excited to be a part of moving forward.

“It was unreal [to play in Swift Current],” said King. “The fans there are great. It was sold out every night and going around town everyone knows who you are and the atmosphere around the rink and the city are unreal. It is great place to play and it’s a hockey town and I am excited to get there and start playing again.”

Last season King was called up and had the chance to play with some extremely talented players in a winning atmosphere. This experience gave King a taste of the WHL and helped him grow as a player.

“It was a great experience, I got a taste of what the league is like and what you have to do,” stated King. “Watching guys like [Aleksi] Heponiemi, [Glenn] Gawdin, [Tyler] Steenbergen and taking notes on what they are doing and how they play. Some of the guys on that team are extremely skilled and they will have bright futures ahead of them. It was good to be out there with them and watching them. It’s something that will definitely benefit my game as well, being able to see them play up close and ask them for guidance.”

King will look to join the Broncos full time after an impressive season with the Okanagan Rockets that saw him post 34 points (13G-21A) in 31 games.

“I think last season went well,” explained King. “We played well as a team throughout the season but didn’t do so well in playoffs. Personally, I definitely improved as the season went on and think that I took strides to being better coming into training camp this season.”

Tough to see the season come to an end, but all involved with the program are proud of the 2017-18 @OkanaganRockets. Team will be back and ready for next season. To all graduating players, best of luck and we look forward to following you, both on and off the ice, moving forward pic.twitter.com/DHj6RyNkrS

In addition to an impressive Midget season, King was also selected to play for Team BC in the WHL Cup.

“It was a great experience being able to represent and win Gold for my province,” said King. “It was my goal heading into the season, I knew I really wanted the opportunity to play at the WHL Cup, so I am very happy that I got to.”

Not only did King attend the tournament and win Gold for his province, he scored the game winning goal in overtime in the final against a stacked team Alberta.

“I went around the net and our defenceman got the puck,” explained King. “I swung in front of the net and got a stick on his shot and it went in. I was speechless, I didn’t really know what had just happened, but it was exciting and it’s a really good memory to look back on.”

King finished the tournament with two goals, one being the game winner, and while he scored a couple goals, he likes to think of himself as a playmaker, and says he models his game after two Stanley Cup Champions.

“I would say I model my game after a guy like Nicklas Backstrom or Ryan Getzlaf. Both have bigger bodies and can pass the puck extremely well. They are also patient with the puck and know when to hold on to it to make a better play and when to pass it.”

The Broncos will need a player with that kind of style. An Ed Chynoweth Cup win is often followed with a couple years or re-tooling the roster. This is from the assets that were given up obtaining quality players for the cup run. A re-tooled Broncos roster would be an understatement, as the coaching staff along with most of the players have been replaced. With a new look in the management and on most of the lines, the Broncos will need someone to step up and fill some big positions. Ben King hopes that it can be him and has been working hard over the summer to prepare for a larger role.

“I’ve been trying to improve my speed and strength,” said King. “Last year I experience what it was like to play against 19 and 20-year-olds. Those were things that I felt I lacked in and learning how to use my size and when to expend my energy versus saving it. I feel confident heading into training camp that I can be an impact player for the Broncos this season.”

Even with the massive turnover and the change in line mates and coaching staff, King is optimistic about next season, and is ready to get it started.

While the Vernon, BC product is happy that training camp is underway and that the season is right around the corner, he made sure to get the most out of his summer.

“I’ve been out golfing, I’ve went to my cabin a few times and to the beach,” said King. “I’ve been making the most out of summer with my friends as we will all likely go in different directions when the season starts and won’t get to see each other that often.”

With a new look, the Broncos hope that King can be their go-to guy and that he will become a leader for the new arrivals.

King and the Broncos will kickoff their quest to becoming repeat Champions on Friday August 31st when they face the Regina Pats in a preseason rematch of last seasons playoffs at 7:00 p.m. in the Regina Pats Tournament, that will be taking place at the Brandt Centre in Regina, Sask.

What is your favorite movie?

What is a hobby of yours that many people don’t know about you?

I enjoy a lot of outdoor activities

If you could have any superpower in the world what would you choose?

What fad/trend do you hope makes a comeback?

Who was your favorite hockey player to watch growing up?